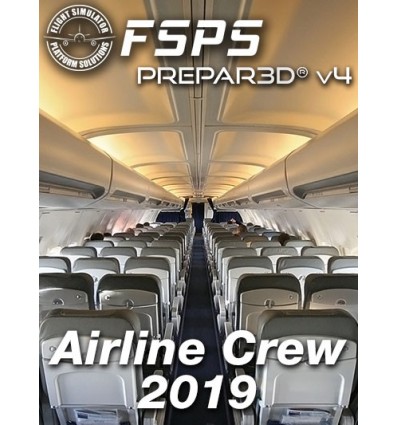 If you previously purchased "Airline Crew 2014" from FSPSSTORE.COM OR THEFSPS.COM, you are entitled to a 20% discount. NOTE: The special upgrade price will be awarded automatically, therefore you must be logged into your same account used to purchase the previous version!

Has been a while since FSPS had released the Ultimate Airline Crew.

The announcements are 'triggered' by events, easily configured with a wizard so the application can be considered "start and forget", and it is so light that will have zero impact on frames or in PC performance in general.

English human recorded voices for both the Captain and the Flight Attendant.
German Spanish French Italian languages also included using computer-generated recordings.
Imperial or Metric different announcements at the part where captain give altitude and speed details to passengers mid-flight.

Configurable selection of a sound device that will play all messages
Speakers configuration (all channels, rear channels, etc)
Voices volume configuration to match the background aircraft "noise" as you wish
Adjustable speech rate for the computer-generated voices

Up and running internet connection for activation and license checking of the product on each application's start-up.

In essence a nice product but dual crew announcements would considerably enhance it i.e. on an Iberia flight first Spanish and then an Engish announcement for non-Spanish pax as in real life.
Also the quality of announcements sounds very flat and I recommend improvement.
Nice idea though!