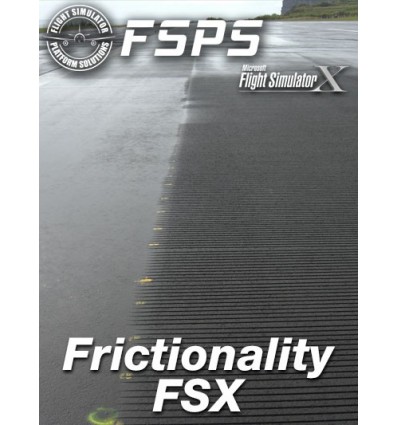 Runway friction in FSX was always a subject of discussion in the developers and advanced users community. The problem in a few words is that FSX friction is unrealistic. In some cases aircraft would taxi on idle thrust while the real aircraft was not behaving like this (or vice-versa) at the exact same conditions. (Runway condition, thrust, weight), aircraft is accelerating faster in wet / snow covered runways and more.

At the start many thought that the aircraft physics model was not made correctly: For example that the thrust was misconfigured or that the weight distribution played a role.
Actually all problems (most times) are due to the way FSX is handling friction.

You can easily test out yourself a part of the problematic default FSX settings by accelerating with a specific aircraft to a specific ground speed down the runway.
You will notice that you will need (just for example) 10 seconds to reach 50KTS GS on model “X”. By changing the weather setting to have a wet runway you will see that you will need LESS time (i.e. 9.7 seconds) to reach the same speed. Is that possible?

Thinking lightly , someone would say yes. The friction of the same surface when on dry compared to wet is higher, so the opposing force would also be higher, so the distance on the same thrust and weight – thus the time – to reach the same speed would also be higher. But is that true? No. In real life there is also the resistance from the mass of water that the wheels travel on and cut through, so a 'virtual weight' or an opposing force, is added to the formula...  That – in real life – causes the aircraft to need more distance and additional time to reach the same speed when on wet!

Some people in the past tried to fixed the problem by replacing the Sim1.dll (the Microsoft file that contains all friction values). Although a pioneer approach to solve the problem, the quality of the results would vary from user to user as some smaller aircraft behaved differently from bigger ones. So the 'patch' would work nice for some but not so nice for others who use different aircraft.

FSPS decided to resolve once and for ever the “FSX friction” problem. By directly communicating with FSX (no need for any external software like FSUIPC) we managed to manipulate the friction for each surface and condition (dry, wet, snow) you could encounter. We managed to be able to manipulate it in real-time, without need of a 'patch' or changing any FSX file. We placed all our knowledge into an application 'armed' with profile saving so you would save each friction for each of your aircraft.

That way you would fix (if you like) only the Grass runway wet friction for your little Cessna that you may don't like , and leave everything else untouched OR you would change all friction values for your complicated Boeing 737 home simulator for all kind of runway types your may encounter and for each of the weather conditions...

Dear FSPS customers, we proudly present you “Frictionality” . The application that will change FSX's friction for ever...

Frictionality is compatible with default or 'patched' Microsoft's Sim1.dll files.