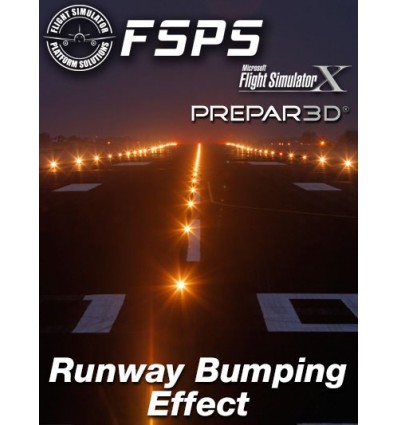 Did you ever think that when rolling for takeoff, things on Flight Simulator are too... quiet? That the takeoff roll is not realistic at all ?

Remembering your actual real life flights, you recall that when the Airplane was accelerating on the runway a large “bump” was heard and a shaking occurred. That is happening due to the Runway Center Lighting system, small lights with their covers that are placed on the center of the runway on standard intervals (most times of 15m):

The nose gear is passing over those little objects but combined with speed, weight and the shape of the aircraft the sound and vibrating effect is something you can't miss.

That is what is missing from FS and FSPS comes to add a new kind of realism in your flights on Flight Simulator series!

Runway Dumping Effect is an addon that calculates exactly your nose gear position, the center of the runway, your speed and the lights position and gives you back audio and visual effect! If you pass over the center of the runway you can't miss it. If you go and roll a bit to the left or to the right of the center-line you will miss it. (Like sometimes real pilots do in order to avoid the sound and the vibration).
And calculating if the nose gear is actually on the runway or not, you will hear the and visualise the effect only during “nose gear on the ground” conditions, just to add more realism!

The effect is given by audio by hearing a “bump” sound every time you pass over a central light and visually by creating a slight aircraft movement (rising and lowering the nose – pitch effect ) each time too.

You can adjust most parameters of the effect yourself to cover your needs also:
The distance between each light, the width of the lights, the volume, the pitch, and save them under a profile for future use.

Combined with a camera head moving software (i.e. Ezdok camera ©) your FS takeoffs and landings will never be the same again!